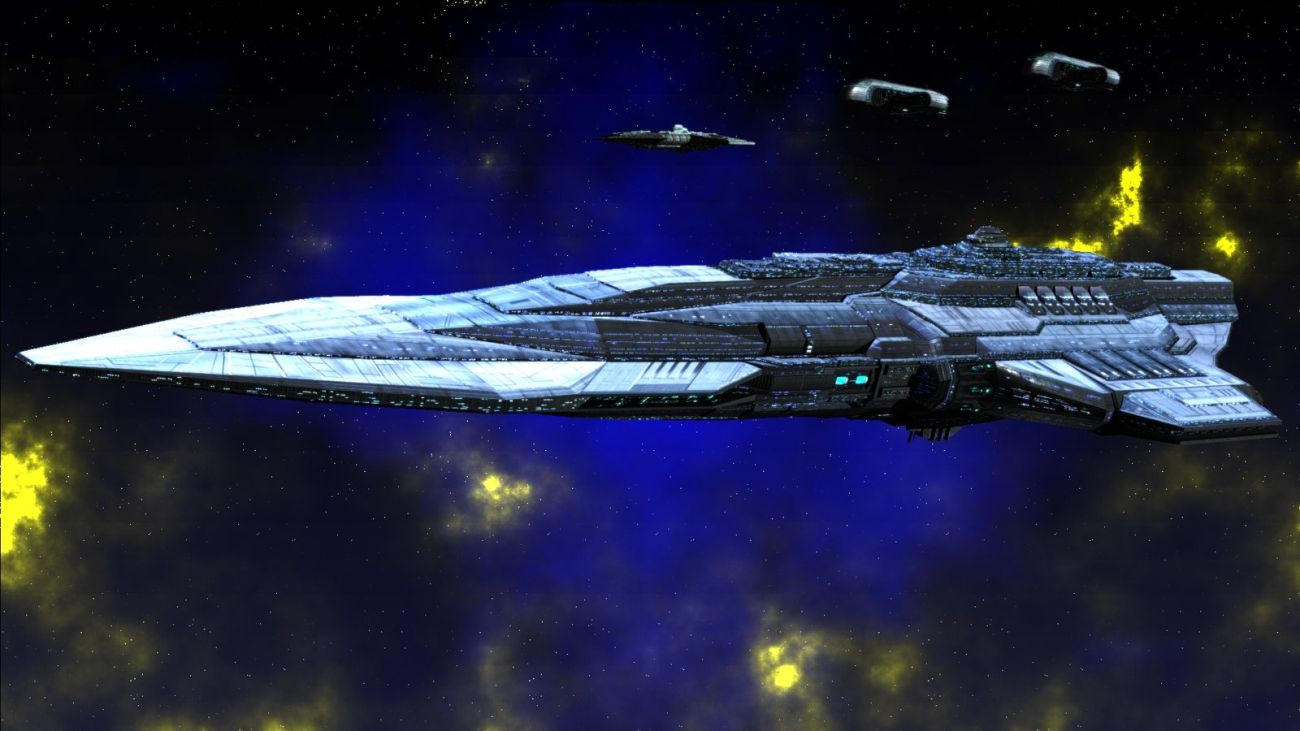 A space station and a Human Destroyer is shown in Earth orbit.

Narrator: “The giant, ring-shaped engines of the Node drive gave us the power to leap to the nearest star at many times the speed of light. After centuries of dreaming, we were finally free to leave the cradle of our homeworld.”

View pans around the station before giving a good look at the Destroyer. It has a standard command bridge, colony pods and a fission-powered engine.

Narrator: “It took us years to build the Earth’s first colony ship.”

The station’s docking arms retract from the ship. The red bridge window lights up and the ship begins maneuvering to pull away from the station.

Narrator: “The Nova Maria was a symbol for all Mankind. Soon it was loaded with Humanity’s best and brightest. They prepared to depart, ready to inherit a galaxy which we had long ago decided was devoid of intelligent life.”

A strange ship slowly appears in the background.

Narrator: “The universe was all out there for our taking.”

Screen fades to black before showing the new ship, partially obscured by shadows.

Narrator: “Hmmph, someone should have told that to the Hivers!”

Five smaller ships (Destroyers) appear out of the shadows and fly past the larger ship (a Dreadnought) and the camera. The camera pans back towards the station and the Nova Maria while the Hiver Dreadnought passes by the camera as well.

Narrator: “They came in silence, no statement of intention, no declaration of war, without even a demand for our surrender.”

Screen fades to black. Reappears with the Hiver Destroyers flying by the Nova Maria while shooting it, two of which end up ramming it and knocking the ring clean off, before the Dreadnought opens fire with all 12 of its heavy beams, obliterating it.

Narrator: “They hit us without warning. Within seconds, our dreams of peaceful expansion were so many burning meteors falling to Earth.”

Narrator: “We barely survived the first Hiver incursion. Years later we would find that we had faced only a small nesting fleet! We had yet to see the full power of the Swarm.”

Fade to a large Tarka fleet.

Narrator: “But the Hive was not the only threat. When we ventured forth, we soon encountered the ruthless legions of the Tarkas.”

Fade to a small Liir fleet. Some of the smaller ships occasionally turn transparent.

Narrator: “And eventually, the phantom fleets of the enigmatic Liir.”

Fade to a large Human fleet, with a flyby of a Sword of the Stars class Dreadnought powering up its heavy beams.

Narrator: “And so, we learned how to build bigger, stronger ships, more powerful weapons. Humanity had to explore, expand, and even conquer, just to hold our own in a universe where weakness was extinction. In order to survive, we learned to wield the Sword of the Stars!”

We are the Chosen Ones, born of the Divine. We are shaped in the image of the Great Masters, born to serve them in the infinite depths. We are warriors, wise men, fathers, and masters. And this is the time of our Ordeal…The Great Silence…when we will prove ourselves worthy to join the immortal Gods and hear their voices once again.

It took years to rise from the world of our spawning. It took decades to reap the wisdom of our first Quarry. But our wiles are unlimited and our thirst for knowledge strong. We have lain quietly in the shadows for a century or more. Skulking among the darkened hulls of dead ships. Raiding the periphery, for slaves and secrets. We tear apart flesh and steel, mind and memory chip…seeking the spark of truth. Seeking the Gods of our birth.

And always we hunger for more.

The time has come; we can wait no longer for the Great Masters to return. Our numbers increase daily; our children hunger, our females lust for war. This galaxy is unworthy of its Gods, overrun by ignorant, arrogant slaves. Mindless insects… pompous lizards… chattering apes… blaspheming rebels. It is time to teach them all their place in the Great Scheme: they will learn to serve their betters…or die.

As it was commanded, so it shall be done. We will sweep all enemies from our path. In the darkness of this galaxy, we will forge an empire of light. We will be worthy. We will find the Gods, wherever they are hidings. We will end their silence and become their Claws once again.

Look to the skies, Children of the Dust and heed My words.

I am First among Travelers, Lord of the Night Sky and Leader of the clans. I am the Voice of the Star Born.

While you crawled, We flew. While you dreamed of wings, we knew the stars.

We came down to share with your ancestors, but we return to find death. Our females slaughtered, our worlds picked over like carrion.

You have laid us a banquet of sorrow. You have risen from your dark depths, your twisting tunnels, your dung-reeking cities, your pitiful nests of stone, and your fields of blood, to lay claim to the very stars.

Blindly you wander, violating the tombs of My Fathers and turning loose your pestilence upon My wives and daughters. And I say enough!

Real war is coming. The Travelers will yield no longer to any who crawl in land or sea.

Find some other place to build your foul nests and fight your petty battles! These stars are sacred... and they are Mine!

So look to the skies, Children of the Dust, and see My coming. I am the Dragon with a thousand wings.

My people are no longer in hiding. And now We darken your skies...

Sword of the Stars Complete Collection